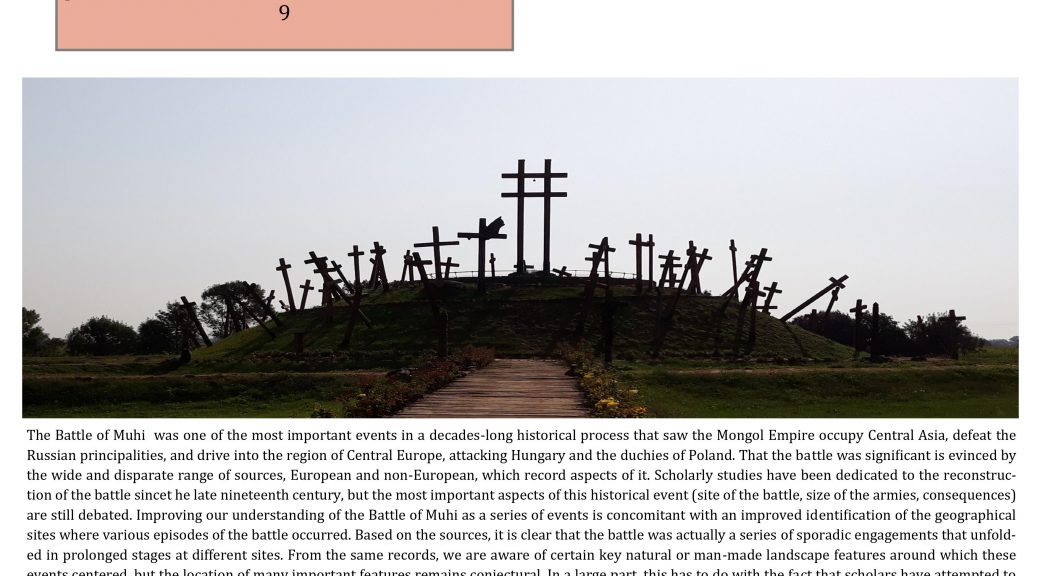 József Laszlovszky will give an online presentation with the title “Interdisciplinary Research on the Battle of Muhi (1241) and the Mongol Invasion of Central Europe”, organized by the Medieval Department of CEU.

The Battle of Muhi was one of the most important events in a decades-long historical process that saw the Mongol Empire occupy Central Asia, defeat the Russian principalities, and drive into the region of Central Europe, attacking Hungary and the duchies of Poland. That the battle was significant is evinced by the wide and disparate range of sources, European and non-European, which record aspects of it. Scholarly studies have been dedicated to the reconstruction of the battle sincet he late nineteenth century, but the most important aspects of this historical event (site of the battle, size of the armies, consequences) are still debated. Improving our understanding of the Battle of Muhi as a series of events is concomitant with an improved identification of the geographical sites where various episodes of the battle occurred. Based on the sources, it is clear that the battle was actually a series of sporadic engagements that unfold-ed in prolonged stages at different sites. From the same records, we are aware of certain key natural or man-made landscape features around which these events centered, but the location of many important features remains conjectural. In a large part, this has to do with the fact that scholars have attempted to reconstruct the battle mainly through the written sources with the contribution of a little geographical and settlement history research. This lecture, based on the recent results of an interdisciplinary research project, aims at integrating and synthesizing findings from a wider range of disciplines than has previ-ously been attempted. Key to this is the integration of archaeological findings and geographical surveys into the picture.

József Laszlovszky is Professor of Medieval Studies at Central European University and director of its Cultural Heritage Studies Program. He is a specialist of medieval archaeology and of different aspects of the history of the Middle Ages. After studying at the Eötvös Loránd University in Budapest and Oxford University, he has defended his PhD on the medieval English-Hungarian contacts. His research interests range from the archaeology of the countryside and monastic landscape through the archaeology of the Mongol Invasion in Europe to the preservation of cultural heritage. He was the leader of the Hungarian archaeological teams at the excavations of different monastic sites in Mont Beuvray (France) and Ravenna (Italy). He was also the leader of the Hungarian landscape archaeological research team at Koh Ker (Cambodia). He is now member of a team of Mongolian and Hungarian archaeologists doing survey and landscape archaeological investigations at the deserted nomad towns of the Kitan Empire in Mongolia. During the last 30 years he has carried out excavations and historical research at Visegrád (Hungary), a medieval royal center. Recently, he is directing the archaeological investigations at a medieval monastic glass production site near Budapest. He has published extensively on the royal palace, town and monasteries at Visegrád, on the medieval economic history of Hungary and on the Mongol Invasion of Hungary in 1241-42.